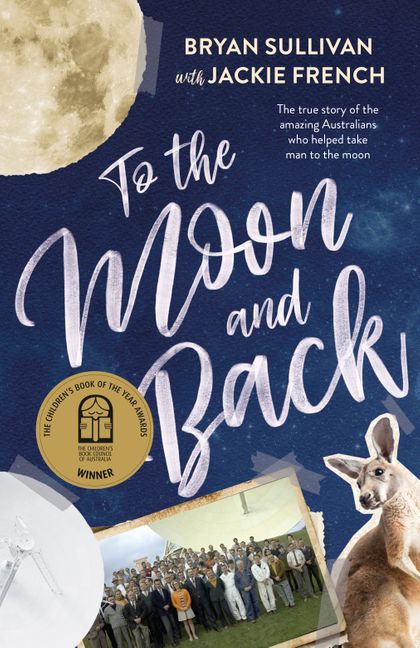 In our library we marked the 50th anniversary of the moon landing before the holidays and I was quite taken aback to find that not only did we not have a copy of this 2005 winner of the Eve Pownall Award but that no one was even familiar with it. So I was doubly thrilled to have the opportunity to review this new revised edition which of course has been re-issued to time with the occasion.

For many Australians the movie The Dish is the extent of their acquaintance with the work of our intrepid pioneer boffins and the part they played in the Apollo 11 mission. However The Dish is fictional and Bryan’s recount of the work at Honeysuckle Creek is written from his own experience and that of his colleagues. Long before the technology tsunami swept the world up, a few dedicated geeks were paving the way for what would become the normality of today’s society.

Bryan affords us insight into his early interest in computer science from his first encounter with a computer in 1958 through the construction of the (then) advanced and ambitious station at Honeysuckle Creek and the ensuing work of all those involved.

Interspersed with Bryan’s narrative the reader will find many fascinating facts about space, the race to the moon, astronauts and of course the question that every kid asks any time this topic arises – how do you go to the toilet in space? *grin*

These were the largely unsung heroes of the Apollo mission/s and it was this that prompted Jackie and Bryan to produce the book originally. Thus it is timely at this point in time to inform another generation of readers that the space missions were not all about the USA and Russia: that a little but significant base in a dusty bush setting near Canberra played not only a valuable but an essential role in the first moon landing.

If your library is also lacking this marvellous book, you should rectify that immediately. With the impetus of the anniversary you will be sure to have many young readers who may also set their eyes, as well as their dreams, on the universe.

I’ve twice had the pleasure of visiting Jackie and Bryan at their beautiful property. Jackie’s graciousness is well known but rest assured that Bryan is equally gracious and very unassuming about the important role in history he played.