A couple of years back I enthusiastically endorsed The Silver Arrow and I am very pleased to say that this second instalment is equally as enchanting for your middle school readers.

A year after they first encounter The Silver Arrow and begin their mission to save the world’s endangered animals via the Great Secret Intercontinental Railway, Kate and Tom are back on board as conductors, but this time things are different. The pair come across a very different train on the secret railway – The Golden Swift – which is also dropping off animals at stations. The problem is that these other conductors are delivering animals to the wrong stations and Kate is determined to find out the whole story.

The ensuing adventures range across the globe from the outback wilds of Australia to the depths of the Bering Sea in a magical submarine and once the identity of the rival conductors is known, Kate feels that they have formed an undeniably positive partnership – one which will change the course of nature for the better. But there’s a huge realisation coming their way – insights into themselves and their new friends, but also a deeper understanding of the complex intertwinings of the natural world – past, present and future.

Like the first, this is not simply about the exciting adventure and quirky characters (where else would you encounter a bossy cassowary who is the dispatcher for the railway or indeed a completely crazy wolverine?) but offers up much food for thought with rich discussions on ethics, brainstorming possible solutions to the terrible castrophe with which the world is faced, and strategies to avoid further damage.

Beautifully imaginative once again, this is a must to add to your collection and your astute readers from around ten upwards will adore it.

In my opinion it’s a rare middle-age novel that can transcend reading interests, age groups and genders but this is most definitely one that can. Certainly your middle grade readers will love it but it is just as appealing for older readers, including adults, as well as competent younger readers with its blend of whimsy and fantasy, strong conservation theme, friendship and family, humour and adventure.

Kate’s wealthy estranged uncle is considered ridiculously eccentric and irresponsible by her parents and really she knows very little about him. Certainly when she writes to him on a whim and asks for a birthday present she doesn’t expect to receive one. She definitely doesn’t expect the gift of a full-sized steam locomotive which appears in her back garden.

While her parents wrangle over what to do with such an unwanted and cumbersome gift, Kate and her younger brother Tom ignore parental doubts and distrust and board the engine in the middle of the night. The journey that ensues is both a revelation and a test of the children’s resilience, initiative and bravery.

To their complete astonishment the locomotive takes off through the night and guided by the engine’s own ‘voice’ they soon arrive at a station where a curious assortment of animal passengers wait patiently with valid tickets to board. The children do not take long to realise that their job is to ensure that each of these creatures, endangered due to various impacts on their natural habitats, are safely delivered to new homes where they can have some certainty of survival of their species. From the sweetest baby pangolin to a very cantankerous porcupine, a beautiful mamba to a sad and lost half-starved polar bear, the Silver Arrow has a mission – one that is filled with moments of danger and near-misses but ultimately the trip of a lifetime for all.

Readers will be thrilled by the excitement of the adventure and adore the laughs to be had but will also learn a great deal about the plight of many of the world’s most threatened animals. Like Kate and Tom, one might hope that they will also take action to do what they can to preserve and conserve the wonders of nature against loss of habitat, introduced invasive species and of course, humans.

I cannot recommend this highly enough for your readers from around 7 or 8 years upwards. It is both a joy and an inspiration and, in my opinion, destined to become a modern classic. 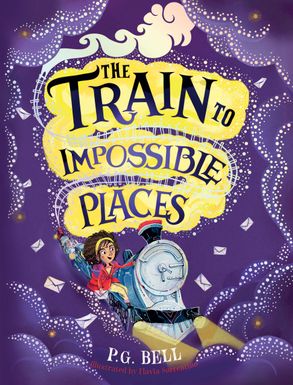 Like Suzy you would no doubt be astonished to wake up in the middle of the night to find a very grumpy troll laying railway tracks straight through your house.  And even more astounded when a gigantic steam train comes rumbling through on those lines with a very odd crew and a very nervous postal officer. Not one to shirk the opportunity to quench her curiosity or indeed discover why this magical train should be invading her home, Suzy jumps aboard and finds herself recruited as an assistant postal officer, delivering packages and mail to impossible places. Her first delivery however proves to be not only tricky but cursed and so a most unusual and dangerous adventure ensues.

In an alternate world where fuzzics (not physics) are in place and two rival powers vie for control, Suzy finds herself battling the forces of evil along with a size-impaired boy called Frederick and a bunch of aging trolls.

Despite the odds Suzy and her team are able to thwart the machinations of Lady Crepuscula and her brother Lord Meridian with such resounding success that when Suzy returns to her home safely, an exciting parcel arrives for her –  her own brand new  Postal Troll Officer’s uniform and a shiny Deputy badge as well. Who knows where her next adventure on the train will take her?

Highly recommended for readers who love humour, magic and a little bit of villainy – probably from about ten years upwards.