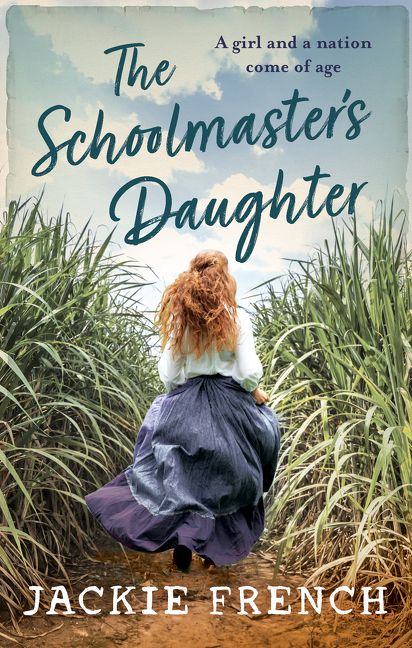 We know so well Jackie’s passion for and skill with historical fiction and when she combines it, as she has with this new novel, with her own family history the result is even more sensational.

Australia at the point of Federation: a new century, a new nation and a new and radical shift in the traditional society and expectations – for some.

Hannah moves, with her schoolmaster father, her liberally-minded mother and her young brother from rural NSW to far north Queensland, deep in the heart of cane country where long-held prejudices and practices exist.

When their ship founders and subsequently breaks up just off the coast of its destination and the men of the party foolishly trek into the unknown, Hannah along with her mother and brother are rescued by a young Islander boy named Jamie. In spite of the evident prejudice of their fellow female travellers especially when faced with Jamie’s clearly white mother, Hannah and Mama begin the first tentative steps towards what becomes a life-long friendship. They go even further when Hannah, denied any further education by her conservative father, and Jamie, denied education by virtue of his colour and birth circumstances, begin to take lessons with Mama, who flouts the convention of being subservient to her husband.

This, however, is just the tip of the iceberg as the new century and the progress towards the women’s vote and other liberations is undermined by the short-sighted government that threatens the very existence of any Islanders indentured to the cane-barons such as the man who employs Hannah’s father.

Family drama, threats by the hardened suspicious townsfolk, secrets long-held by neighbours all impact on the family, driving Hannah and her mother further and further towards an escape from the tyranny of both husband/father and their close society. It’s not just Hannah and Jamie fighting for their right to education any more, it’s about a true equality for all and Hannah’s mother is well-placed to act with courage and determination to free herself and her children at a time when such actions were almost unheard of in ‘polite society’.  How very proud Jackie must feel to have the inspiration of the women in her family to create this fictionalised (but close to truth) narrative history.

This is fascinating and terrible, at times, as a very ugly side (yet another one) of Australia’s history unfolds and the depth of the struggles by the women who came before us is revealed.

Once more I was completely enthralled in and enriched by Jackie’s historical revelations – both the personal and the Australian aspects. In every book I learn things I’ve never known and in a way, that makes them vibrant and memorable. As always this is a superb way to introduce young (or older) readers to little-known (and very probably well-hidden) darker sides of a new nation and certainly to the very real and often tragic plight of women of the time.

As always, I cannot recommend this highly enough particularly for readers from around 13 years upwards.