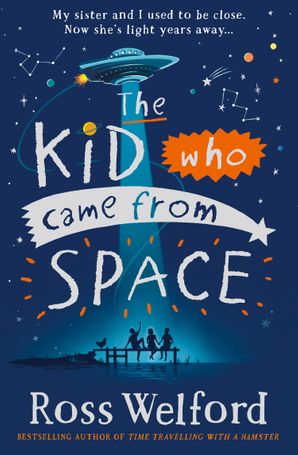 This is the second Ross Welford book I have read and reviewed [The 1, 000 Year Old Boy] and once again I am tremendously impressed in his story-telling which takes something unbelievable and makes it completely feasible.

A small village in Northumberland is shocked and in turmoil after the mysterious disappearance of 12 year old Tammy especially of course her parents and her twin brother Ethan. Despite vigorous and thorough searching there seem to be no clues. That is until Ethan reluctantly accompanies relative newcomer and definitely odd Iggy for a spot of fishing to ‘take his mind off’ the situation. The boys don’t have any luck with the fishing but they do ‘catch’ something – the realisation of an invisible spacecraft and the appearance of a definitely visible fur-covered tailed humanoid called Hellyann – who indicates that she not only knows where Tammy is but how to rescue her.

Imagine a civilisation that keeps animals in a zoo for the edification of its own species – oh that’s right – but imagine if that civilisation is located on a remote planet in another galaxy and the animals kept are actually humans. That’s where Tammy has been taken by one of the ‘Hunters’ of the planet Anthalla. This race has become so uniform and so controlled in its past 500 years of history that no member of it dares to disagree with any of the strict protocols in place. There may be order and peace but it’s at a price – with no individuality or emotions allowed. The flaw in that is that there are just a few Anthallans whose ancestors were of ‘mixed’ DNA so that their descendants retain some human traits – such as emotional responses. And Hellyann is one of these ‘Hearters’ and knows that there is something inherently wrong with abducting a human, removing it from its family and keeping it sedated and contained. Hence she sets out on a mission to rescue Tammy but enlisting Ethan and Iggy.

There is much humour to be had in this narrative but also a great deal of thought-provoking concepts to consider. Once again Welford has crafted a story which demonstrates the unerring ability of children to bridge the sometimes vast gap between others and forge unlikely friendships as well as rising to challenges which reveal their inner reserves of determination, resilience, courage and compassion.

Another truly worthwhile book to share with your readers from around 8ish upwards, I highly recommend it for Middle Primary to Lower Secondary students.