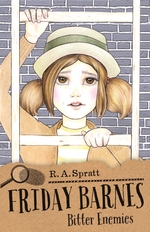 Beginning of term at Highcrest Academy has never been so dreary and desolate. Melanie and Ian are both depressed and missing their quirky best friend Friday, who has been whisked off to Switzerland to be with her family and attend Europe’s most elite school.  Adding to their misery, the start of term assembly sees the announcement of the school’s anniversary celebrations and the return of four previous headmasters. Good grief! Surely one headmaster is enough for any mortal?

However, they have not reckoned on the surprise return of the school’s most dedicated nerdy sleuth who appears dramatically at the doors of the assembly hall ready to deal with anything that might just foul up the anniversary celebrations. And just as well, the students have been warned to be on their best behaviour but apparently no one told the former headmasters the same thing. You have no idea how much havoc can be created by embittered former educators – wait, perhaps you do!

As usual, Friday is on hand to solve the mysteries, explain the inexplicable and generally get everyone out of trouble although not without finding herself in a pickle at the same time.

Old and new characters make their appearances and really you have to love Mrs Cannon, the world’s laziest English teacher – I wonder what might happen if I tried that approach?

These are such fun to read and Friday’s idiosyncrasies are so goofy as to be endearing. The solid friendships are a great feature of this series, proving you don’t need to be pattern made to fit in.

There is also the pathos as we find out more about Friday’s ghastly family and oh oh, the shocker at the end – what will happen to Friday when…. Oops, never mind, you’ll find out.

These are always high in demand in my library and I know the readers are waiting on this new one impatiently.

Highly recommended for readers from around 8 years upwards.