So last night I took time out from review books to re-read HP & the Philosopher’s Stone – my brand new beautiful Hufflepuff edition. Yes, I’m proud to be a Hufflepuff and yes I do mentally say ‘Alohomora’ every time I unlock a door. I also mentally release my Tonkinese cat patronus when the need arises as one does and tell people to ‘Budge up yer great lump’.

When I finished reading it as I was going to sleep some various thoughts were running through my head. Like many others in the past week and those leading up to anniversary, I’ve read, heard and watched interviews and commentaries from various folks. So I thought why not share my own?

Now the first thing I thought about was the very fundamentalist RE teacher at one state school who wanted the books banned from the library. I’ve worked in many church schools and I do understand if a particular faith objects to magic/witchcraft/etc although I don’t agree with the reasoning. But I do have a real problem indeed quandary about some that allow all other books with witches, wizards, magic and more yet won’t have HP on the shelves. Why is that? I’ll come back to that but it makes me wonder if it’s more like the  Enid Blyton blitz back in the day more than the spiritual objection – that somehow because of its popularity there must be something inherently wrong with it.

I thought about that time when my middle daughter and I had been first in the door to buy HP & the Half-blood Prince, binge read it and the next day at a family dinner proceeded to have a very vigorous discussion about our opposing viewpoints on Snape (me maintaining his good guy status, she not and wanting to curse him herself). My dear late mother looked up with great bewilderment and asked, ‘Aren’t these book characters you’re arguing about?’  Hmmm, well yes but they’re like real people you know. This made me think about just how many animated discussions I’ve  had over the years with both kids and adults about our favourite characters, incidents etc. Just how many books/series can you say completely and utterly leap the chasm between all ages of readers with such gusto?  I know there are critics who claim it is not ‘great literature’. Personally, I’ve seen many books awarded Book of the Year for their literary merit that remain on shelves to gather dust unread until their pages yellow and crumble. I rest my case on those points.

Then I considered the positive values that are so evident throughout the whole series: unconditional friendship, love, loyalty, courage, resilience, initiative, determination, inclusivity, kindness, honesty/truth, self sacrifice, generosity, and compassion – what have I left out here?  This compared to the vices which are thwarted at every turn:  deceit, treachery, greed, lust for and abuse of power, spite, cowardice, bullying, cruelty, bigotry and callousness.  At the very heart of the series is the eternal battle of Good against Evil and the concept that no matter how dark the times, or how overwhelming the enemy or how apparently futile the resistance, the only way to overcome Evil is for each one of us to face up to it. This theme is demonstrated in stories from David and Goliath through to the Narnia stories and Tolkien’s overthrowing of Sauron by two little hobbits. How can this not be pertinent in church school libraries or indeed anywhere we are trying to raise decent human beings who will stand up to be counted against blatant injustice and abuse of position?

The last thing I thought about was JKR’s skill with foreshadowing. I have read some of her ‘back story’ notes made before and during the writing of the books and am so impressed with this seemingly effortless technique. Particularly last night I thought about Neville. Who would have thought that the little round-faced clumsy boy who was always losing his toad and was almost afraid of his own shadow would become the bloody and beaten young man who defiantly challenged Voldemort with nothing more than the Sorting Hat? In this very first book the support and encouragement of his friends to ‘stand up for himself’ (even to their detriment almost!) was the start of the growth and development of Neville’s confidence and self-belief.

All in all, yes I am a dedicated Potterphile and proud to say so for many reasons not just those above and perhaps that as well as these reflections it is pure good fun and every time I re-read I am transported to a magical world that I love – ‘always’. 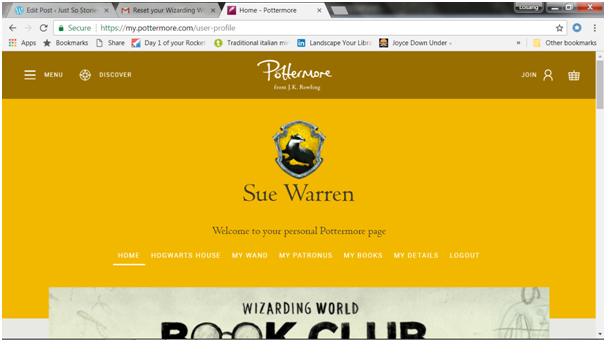