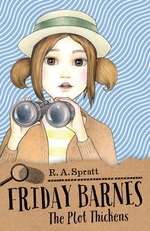 I have some readers who have been driving us mad in the library waiting and waiting on a new Friday Barnes fix – and here it is!

Friday’s at her best solving mysteries, uncovering truth, being a complete dork and antagonising people in this latest episode. Her on/off friendship with Ian Wainscott begins unravelling faster than Friday’s daggy cardigans when she catches his formerly incarcerated father out in a huge lie about wanting Ian to live with him. Ian is furious that Friday has humiliated him in front of everyone.

That sets the tone for the whole term with things going awry all round. Two new teachers, a rather bogus celebrity artist taking over the Art class and an unlikeable bumptious PE teacher seem set to make Friday’s life more difficult.

Ian’s retaliation for the public shaming is a series of pranks played against Friday which begin to make her school life quite intolerable to the point where she starts to contemplate leaving Highcrest Academy.

However, in the meantime there are problems to solve with mysterious graffiti appearing all over the school, perimeter fences being cut in the dead of night and a rogue vending machine catching hold of arms.

It seems that Friday is really up against it this term but always plucky and unable to curb her innate insatiable drive to find the answers to any given unexplained incident, she ploughs ahead and of course, a satisfactory resolution (and armistice with Ian) is the outcome.  This is one girl protagonist who really brings joy proving that you don’t have to be a popular fashionista to be a winner – smart, caring and unpretentious, Friday is a Mighty Girl in my opinion.

As always, highly recommended for readers from around 8 and up – I foresee multiple reservations for this one in our library!